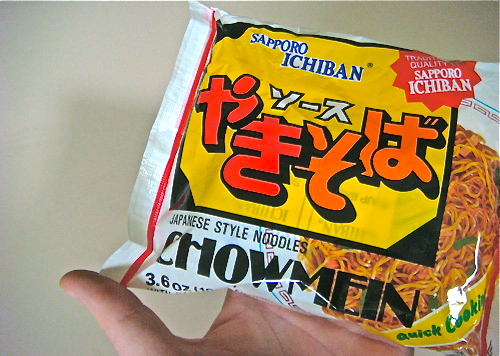 This week’s honor starts with a discovery I made very young.

My grandmother Lena (mother’s side) grew up on a small Kansas dairy farm during the Great Depression. A timely (or untimely?) result of this childhood, her penny-pinching scruples were notorious. Unless a particular occasion was deemed special, she was militant about keeping food costs to the minimum.

Unfortunately, this was an admirable financial trait never adopted by her grandson.

When my grandparents eventually moved to Arizona several decades ago, being exposed to the vast and diverse offerings of our much-larger supermarkets (in comparison to rural Kansas at the time), Lena fell in love with one exotic item in particular⎯cheap, instant ramen noodles.

Lena had a stubborn, “Midwestern palate,” but quickly became a fan of the pre-cooked Japanese noodles. In fact, she would purchase them by the basket full.

This was not only my own first exposure to ramen, but also to the suburban world’s cult reaction to the budget-friendly eats (read: buying oversized quantities and hording).

Every Tuesday after school was ‘visit grandparents day’. My mother would leave work early and drag me to my grandparents house for an afternoon of naggy chit-chat, Wheel of Fortune and, of course, an early evening “snack” of instant ramen.

Needless to say, ramen noodles were definitely the afternoon’s highlight. Most kids received candy or baked goods when they visited grandma’s house⎯I got a bowl of ramen.

In fact, some of my very first memories of cooking at all were on those said Tuesdays, sitting atop my grandmother’s favorite green-padded kitchen stool, watching and helping her prepare my ramen noodle soup. Which, at the time, I considered a very complex preparation.

Fast forward a decade or two, my love of instant ramen noodles was starting to wane a bit. I became bored with them. Not because they weren’t fundamentally good, but my palate had since matured⎯I craved more bang for my cooking efforts.

One lazy day, browsing the grocery store several years ago, I stumbled upon my current instant-noodle love: Sapporo Ichiban’s Japanese Style Noodles Chow Mein (there has to be a more efficient name).

Though these are not ramen noodles (think yakisoba), they tend to fall into the same breed of foods. Packaged identically, they are both dried, instant, pre-cooked Japanese-style noodles.

Unlike traditional instant ramen, which is intended to be a soup, these yakisoba-style noodles require little cooking water. The individual packages also include additional, more complex flavoring components, as opposed to what is essentially just packets of dried stock with the ramen variety. Overall, the finished product is more pan-fried side dish, than ramen’s more brothy, soupy example.

In my own pantry, this item has become a considerable player in my often hectic cooking rotations. Though my grandmother Lena ultimately never instilled her budget-friendly food tenets in me, her large stockpiling and frequent usage of these instant noodles have been adopted wholeheartedly.

For cooking, mix in left-over proteins, varieties of seafood, or go strictly vegetarian. These noodles can provide an empty canvass for creating a very satisfying dish, particularly when time constraints don’t always allow for more creativity.

During moments of post-work inertia, a generic, consistent and comforting favorite of mine is stir-frying pre-prepared noodles with drips of sesame oil, soy sauce and Sriracha, folding in handfuls of crushed peanuts, raw bean sprouts, sliced scallions and rips of pineapple. Feeling golden, I will have prepared a lazy, well-rounded dish that feeds the stomach gracefully.

My next GL award goes to these instant noodles of a very long, unnecessary name. Again, just think instant yakisoba and you’ll be just fine.