And the winner is? Though close, not us.

Not knowing what to expect of Dole Foods’ inaugural California Cook-Off event, I tried to prep myself mentally for anything slung my direction. What blindsided me? How much fun I had.

When I first opened the e-mail last April (first announced HERE), the one including an invite to be a participating food blogger at the freshman cooking event, I will be the first to admit I considered it spam. (I get a lot of PR spam.) It took a subsequent week of dedicated back-and-forth correspondence before finally accepting that not only the invite was legit, but, that the invite was for me. Four days, three nights in Los Angeles, paid-for? Transportation arrangements and discretionary income supplemented? Wow⎯why not. 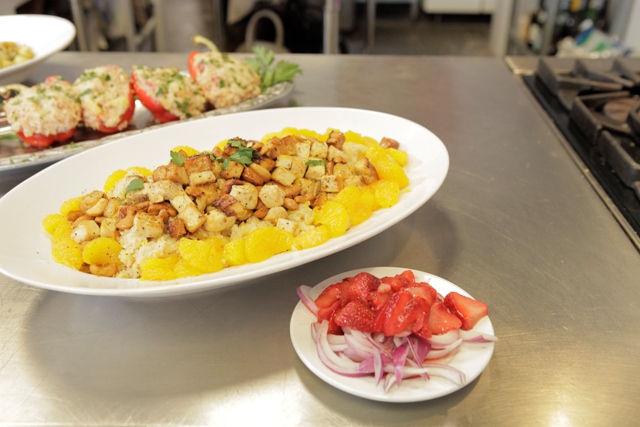 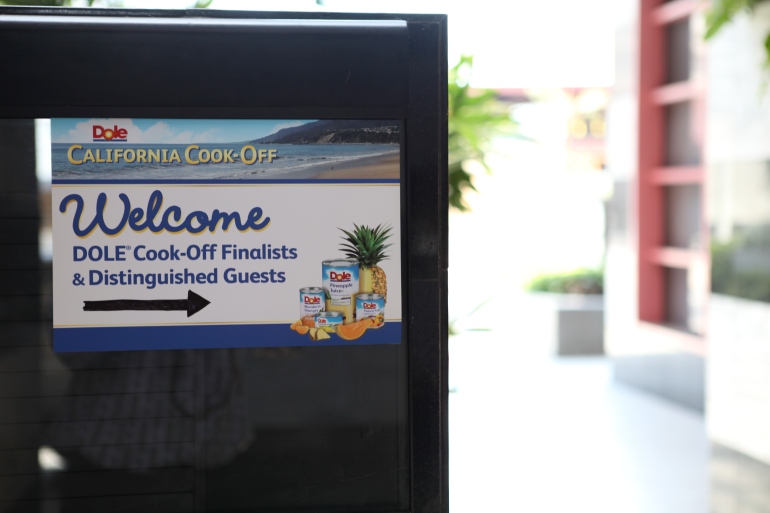 The competition presented six recipe finalists (of 4,000 such submissions nationwide) who traveled to Los Angeles, CA, and prepared their respective recipes (utilizing at least one Dole Foods’ product) in a live cook-off that was judged by lovable, well-known chef Ben Ford. Each recipe contestant was also paired with a “sous chef,” in food blogger form⎯someone who not only assisted them in the actual cooking of their dishes, but also someone who helped cover the experience via our own blogs and social networks.

Leading up to the event, all recipe finalists and bloggers were kept in the dark about possible pairing designations. Knowing only a list of names and some basic information, we were each left to ponder curiously about who might be our team member. There was a finalist with a chicken burger recipe; one with a recipe that included stuffed bell peppers; one with a quinoa and bacon-wrapped scallops recipe; another finalist with a tofu-anchored recipe, with candied cashews over a mandarin-ginger rice; and, a finalist with a Thai-inspired chicken recipe with a fruit and avocado salsa. Of all the selected recipes, I must be frank: I feared the dish utilizing tofu most. Having countless friends who adhere to vegetarian or vegan eating habits, I knew well that unless deftly prepared, tofu can swing abruptly from delicious to, well, something completely opposite. I didn’t want to screw anything up…

Yours truly was called to be on Team Tofu. Of Course.

To my ironic surprise (and subsequent delight), the recipe finalist who I was paired with was Kathy Patalsky. Coincidentally an established food blogger in her own right, Kathy is the creator of the burgeoning vegan-focused lifestyle brand The Lunchbox Bunch. Suffice to say, this immediately gave the two of us a mental point of camaraderie. (Read more about Kathy HERE.)

As swiftly as the team designations were announced, Kathy and I shared a brainstorming pow-wow. Kathy was (and is) a complete gem, and any personal hesitations about dedicating focus to her recipe faded immediately. Though I’m biased, I’d even argue that we easily became the team to beat. If not for the food itself, then at least for our work ethic⎯steady, collected and deadly. After the timer began ticking, the two of us were in laser-like sync.

We had a title to win.

In true form, minutes before each team was to begin preparing their dishes, a plot twist was presented⎯each team had to also make a entirely separate, second dish in the same hour and a half time period alloted for the original. Each of the teams’ sprung recipes were randomly selected from the vaults of Dole Foods⎯volumes akin to old Betty Crocker recipes. No Chinese-Peruvian love-making; no mystical, molecular gastro-physics here⎯think June Cleaver standbys dusted off for resuscitation. Thus, our second dish was bestowed: roasted sweet potatoes, with mushrooms and wilted arugula. Easy as (an easy) pie

With our primary dish, I’m proud to report that Kathy’s cashew tofu over mandarin-ginger rice was wholeheartedly delectable. In fact, one of the best iterations of the infamous soybean curd I’ve ever tasted⎯most especially a non-fried example. Labeled “innovative” by chef Ford, it’s a dish I’d love to perfect myself. If prepared for nothing else, to simply showcase inherent virtues of well-executed tofu to otherwise tofu-adverse friends. To put it another way: Kathy made a mean dish. It was easily apparent the recipe had the chops to compete with any of the meat-focused entries. I was a proud partner in crime.

Prior to the verdict, everyone in attendance participated in a communal feast of our entire groups’ creations. As a self-enlisted cynic at the outset of this entire experience, I can now willingly concede that I couldn’t have imagined such a gratifying spread made largely utilizing Dole products. Though entirely justified and commendable, in a world frothing over the severely organic⎯farm-to-table this, independent purveyor that⎯this growing event shows that elevated quality, genuinely healthy and incredibly flavorful eating can also come from some of our corporate brethren. For fear of sounding like a shill for Dole Foods (and not loosing any shred of food-worthy street-cred I’ve ever managed to retain), as a general rule, I do always prefer foods fresh, organic, in-season, local and or market-sourced to a majority of items found in your average suburban grocery isle. Again, with that said, it’s also nice to know there are some corporate mainstays out there who have been able to maintain a standard above the often bleak, mass-produced monotony that (unfortunately) exists out there. So for that, thanks Dole. Color me surprised.

With that, the preeminent winner of the first annual Dole California Cook-Off was Janice Elder who prepared those Thai-spiced chicken thighs “crowned” with an avocado and orange salsa. I had the pleasure of sharing light dinner-table conversation with Janice, dining across from her (and her equally affable husband) during the event’s communal feast. She was a sincerely delightful person. A very gregarious woman worthy of every accolade, most especially this one. In jest I say “preeminent winner” because, well, I hold that Kathy and I also knocked it out of the park⎯we were definitely winners in our eyes.

Once again, big thanks to every party involved. New friends were definitely made.

* Photog note: Above photos are mix of images taken by myself, and by the Rogers Group/Dole Foods. If unable to decipher my photos from those taken by the hired professional, contact me. I will gladly provide proper credits.